Why are Christians Anti-Everything?

I will begin a new series where I take on questions that either Christians have given me or I’ve been challenged to answer in spiritual discussions.  These will be café type answers; ones where I won’t go into great depth and can be employed in the public square. 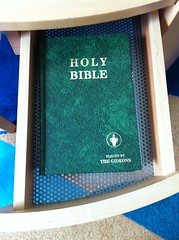 Question: Christians today are way too reactionary – being anti-gay, anti-abortion, anti-this and that.  Droves of younger people are walking away from the church because of their anti-attitude.  What should we do?

Answer:  The church has always taken a stance when it comes to moral issues.  We are under the authority of the Bible.  The Scriptures teach us to be prolife, pro-heterosexuality, pro-sex inside the confines of marriage, and pro-marriage reserved for a man and a woman.  We are pro-Biblical morality.  Whenever the church takes a stand that goes against the politically liberal viewpoints we are apt to be put on display in a negative light in newspapers, magazines, radio, and on television.  This is why it seems we are anti-everything.

In fact it is the church that has been attacked and labeled as anti this an anti that.  Labels such as these are used as tactics to get the church to shut-up.  I have been called anti-Mormon because I disagree with Mormon doctrines in my writings and witnessing.  They want me to stop critiquing their worldview and quit sharing with their missionaries.  All books that expose the false beliefs of Mormonism are labeled anti-Mormon.

The fact that young people are leaving over the moral stance of the church demonstrates the shallowness of many of the younger generation.  We are not losing true believers in Jesus Christ; we are losing cultural Christians who grew up in the church and today want the church to be neutral in areas of morality.  This we cannot and must not do.

Some churches reacting to young people leaving have compromised the Biblical values in order to grow their church.  Homosexual pastors can serve in the ministry in some denominations.  Sin is no longer preached in many churches.  Compromising God’s moral standards are an abomination in the eyes of the Lord.  These churches will come under God’s judgment.

Our job is to share the truth in love.  As long as the church takes a Biblical moral stance it will come under attack from the homosexual community, abortion providers, and young people who want to live by their own morality.  This attack is only going to intensify.  We have just seen the tip of the iceberg when it comes to secular society trying to dismantle the Christian church or at the very least get it to shut up.

As followers of Jesus Christ we are not anti-everything but pro the good life.  God is not a cosmic killjoy and has communicated through the Bible how we can experience the fullness of life.  True joy can only be found in a relationship with Jesus Christ.

Previous post: Is it Moral for God to Kill an Innocent Human Being?