Question: Isn’t eternal damnation for temporal sins overkill?  Why should God punish forever those who have only sinned for a short time?

Answer: One view that tries to deal with this question of eternal punishment is universalism.  In this view when people die everyone goes to heaven.  Therefore, there isn’t any eternal punishment.  Since this view goes against the clear teachings of the Bible I consider it false.  I will not spend time refuting it.

A second view some theologians have proposed is called annihilationism.  Until recently only heretical groups like Jehovah’s Witnesses held this interpretation.  According to this view when the unbeliever dies he or she goes out of existence.  The believer goes to heaven and the unbeliever is annihilated.  Arguments in favor say 1) the Greek word for destruction of the wicked implies they are no longer in existence, 2) eternal damnation provides an inconsistency between the love of God and eternal conscious punishment, and 3) there is a discrepancy between sins committed in time and eternal punishment.

The first argument against annihilationism is all the Bible verses that speak about eternal punishment.  By reflecting on these scriptures this view is untenable.  I will examine a few of these verses.  Following the judgment of unbelievers and believers we read in Matthew 25:46 “These will go away into eternal punishment, but the righteous into eternal life.”  In Mark 9:47-48 Jesus tells His disciples,“If your eye causes you to stumble, throw it out; it is better for you to enter the kingdom of God with one eye, than, having two eyes, to be cast into hell, 48 where THEIR WORM DOES NOT DIE, AND THE FIRE IS NOT QUENCHED.”  Hell here is described as a place where the worm lives on and the fire does not go out.  John the Baptist told the Jewish religion leaders that the wicked will be “burned with unquenchable fire” (Matt. 3:12).  Fire produces pain described as “weeping and gnashing of teeth”(Matt. 8:12; 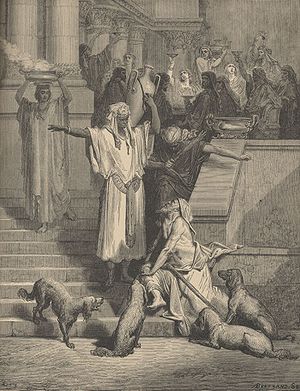 [By Gustave Doré parable of the rich man and Lazarus  (Wikipedia)]

13:42, 50; 22:13; 24:51; 25:30).  Eternal punishment is depicted as a “coming misery,” “easting flesh with fire,” and the “day of slaughter”(James 5:1-5).  This suffering is constant because it is said that those in hell “will have no rest day or night” (Rev. 14:11) and “will be tormented day and night forever and ever” (20:10).  And finally, the parable of the rich man and Lazarus in Luke 16:19-31 gives us a glimpse of heaven and hell.  The rich man was conscious as he suffered in hell.  Pastor John MacArthur writes, “Though human sensitivities may balk at the doctrine of eternal punishment, it is both the explicit teaching of the Bible and demanded by God's justice and holiness.”[1]

Many passages speak about ‘destruction’ as the punishment for unbelievers after death.  For example, 2 Thessalonians 1:9 “These will pay the penalty of eternal destruction, away from the presence of the Lord and from the glory of His power.”  Additional passages include Matt. 7:13, Rom. 9:22, 2 Peter 3:7, and Rev. 17:8.  The Greek word for destruction doesn’t have to mean gone from existence.  The same word has multiple meanings in the New Testament.  It can mean the harmful and destructive effects of final judgment on unbelievers; also personal ruin.  When combined with the many clear verses on eternal punishment the best definition seems to be personal ruin or the destructive effects of judgment.

What is inconsistent between love and punishment?  Doesn’t a loving father discipline his children?  Does God have the right to punish moral criminals?  If punishment is justified, then what difference is there for the length of time God can punish?  If God has the right to punish for some length of time, the span of time is a non-issue.[2]  It is the prerogative of the one whose laws have been broken.  To claim the length of punishment is disproportionate to the crime is assume we can know the extent of the evil done against God.  Who are we to judge God?  Who are we to make suggestions to God what is and isn’t appropriate punishment for the sins of the world?  Plus sins against an infinite being should have an infinite punishment.  If not then once they pay for their sins, they should be allowed to enter heaven.  Similar to human justice, we let criminals go free once they have paid their debt.

The amount of time it takes to commit the crime doesn’t factor into our justice system.  To murder someone takes seconds and yet, in our courts the person either gets the death penalty or life in prison.  Time perpetrating the wrongdoing isn’t the issue; the penalty is assessed based on the severity of the crime.  Who are we to judge the severity of our crimes against the eternal creator of the universe?

CS Lewis once said the doors of hell are locked from the inside.  People receive the desires of the hearts.  Since God has created creatures who consciously will live forever, then the penalty of rejecting God is separation forever.  Why would God force into heaven someone who would rather worship self rather than worship the creator?

Finally, where is the justice if all unbelievers get the same annihilation?  Hitler and Stalin get the same punishment as an unbeliever who has lived a good moral life.  Under this system if you are not going to follow Jesus you can be as evil as you desire; there is no ultimate justice in the universe.  This viewpoint is clearly wrong.  God is not only a loving God but He is just.  Eternal punishment preserves the eternal justice and holiness of God.  Praise God there is justice in the universe and a person like Hitler will get what he deserves!

Next post: Part 3 Challenging a Jehovah’s Witness with the Alpha and Omega argument