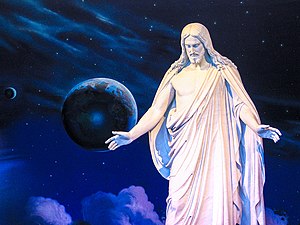 Knowing my desire to share with Latter Day Saints, my children called a 1-800 number from a TV advertisement so they could order for me the Mormon video “The Lamb of God.”  To my surprise the video came in the mail addressed to me with documentation concerning the story of Joseph Smith and how I could join the Mormon Church.   What my kids didn’t realize was by ordering these videos I began to receive a series of phone calls from the Mormon Church in Salt Lake City Utah.  I must have hung up on them 10 times telling them I am not interested before God hit me on the side of the head.  I heard God’s still loud voice shouting at me, “They’re calling you to talk about Jesus you idiot and you’re hanging up on them!  What planet are you from?”  I didn’t have to answer the question; Mars of course.

Finally, one evening after passing on 10 calls, I took the call and got into a 45 minute discussion with a Mormon from Utah.  We discussed many subjects and I challenged him as best I could.  It was great fun.  Eventually the call had to end; he needed to move forward with more phone calls.  However, he asked me if I would like 2 Mormon missionaries to come and visit.  I said yes; this time without God walloping me on the side of the head.

A few weeks later two young men came to my house, the first of four visits.  I asked them where they lived, where they went to college, and what they were intending to do in the future.  Essentially, I made friends with them.  I asked them if was okay if we discuss issues pertaining to what we believe from the Bible, since it is a book we both used; they agreed and we began our talks.

During those visits we pored over the Bible and the teachings of Joseph Smith.  Over time I slowly introduced more evidence for why they were wrong.  It is probably an urban legend but there is an illustration of placing a frog in a pan of water and turning the heat up slowly.  The frog’s body adapts to the slow rising heat and eventually is fried to death.  This was my approach to my new Mormon friends.  I would turn the heat up slowly with the hope God would take the message of salvation to their hearts.

Next post: Part 3 How does atheism explain the problem of evil?