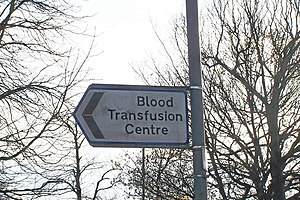 English: Blood Transfusion Service, Longley Lane, Sheffield It is many years since the National Blood Service was known as the Blood Transfusion Centre … but this sign on Herries Road still points the way … and the general public still know what it mean! 1065750 (Photo credit: Wikipedia)

As part of examining the Watchtower Organization I’d like to touch on a couple of controversial topics that have implications for society.  These include blood transfusions and holidays.

Blood transfusions:  According to the Watchtower Society, a Jehovah’s Witness must refuse blood transfusions in all circumstances – even when doctors say death is inevitable without such a transfusion.  Also the Society requires parents to see to it children never receive them.  They believe a transfusion is the same as “eating blood,” which the Bible prohibits.  Watchtower theology teaches that a proper view toward blood is critical to a right relationship with Jehovah.  Their scriptural support can be found in Genesis 9:4 (NIV) “But you must not eat meat that has its lifeblood still in it.”

In a conversation on this topic you might also want to point out that thousands of Jehovah Witnesses have died because they put their confidence in previously distorted Watchtower passages on health issues.  Over the years infants have died in front of Jehovah’s Witness parents who followed the teachings of the church.  The following are some examples of so called Biblical teachings that in the past governed the actions of their adherents.

Ask the Jehovah Witness, with this track record of prohibiting vaccinations and organ transplants and then years later allowing them, how long will it be before they change their mind on blood transfusions?  How many more lives will be lost before they change?

Holidays:  Jehovah’s Witnesses do not celebrate Christmas, birthdays, Easter, or any holiday they consider non-Biblical.  They say if it wasn’t celebrated in the Bible, then we shouldn’t celebrate it today.  They try to make the case that Christendom (that is what they call Evangelical Christians) worships those holidays above Jehovah by making them such an important day.  They would claim Jehovah’s Witnesses are a more pure religion worshiping only Jehovah.  Yet, they do celebrate anniversaries.  Where in the Bible does it teach we should celebrate anniversaries?

This idea to celebrate is equal to worship is absurd.  I am certain the typical Jehovah Witness celebrates milestones in their family all the time and yet, doesn’t consider those practices as worshipping.  Celebrating does not lead to worship.  Evangelical Christians worship the one true God and His Son Jesus Christ.  Worship is to serve God with our entire being.  Celebrating neither qualifies as worship nor prohibits the ongoing practice of full devotion to God.

In addition to blood and holidays, many Jehovah’s Witness will want to discuss additional side issues such as war (they are pacifists), end times, and other topics.  Their emphasis on holidays and blood is a red herring, a way to distract the discussion from the truth of their beliefs.  I do my best to change the subject, as these topics move us from what are the important issues; such as who is Jesus and salvation.  My suggestion during a discussion is to major in the majors and change topics to Jesus as soon as you can. Holidays and blood transfusions are just areas where they exhibit pride, trying to show their religion is better than yours; don’t get trapped trying to compete. Go to part 8 here

Next post: Does the Assurance of Salvation Lead To Sin? Part 1