Part 15 The Joker is the Hero of Moral Relativism 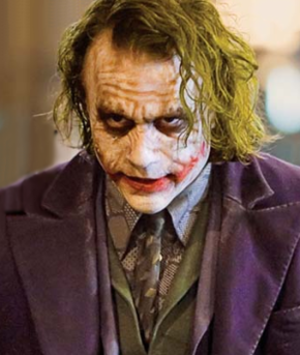 Today I was watching the movie “Dark Knight” and I realized the Joker was the great moral hero of relativism.  Why?  The Joker was a sociopath; he did what he wanted to do. His only objective rule was there are no objective rules.  He did what his heart desired and for the Joker that was right and good. This is exactly what the moral relativist does.  He does what he wants to do.  There are no universal rules.  There are no essential differences between the beliefs of the sociopathic Joker and the relativist.  Today many sociopaths are in prison.  This doesn’t mean all relativists are sociopaths but according to their belief system they could be.

The Joker loved to blow up buildings, destroy cars, kill people slowly, and cause as much pain as possible because those things gave him great pleasure.  We could call this the “pleasure as ethics” morality.  The relativist follows a similar path.  For the most part they do what gives them the most pleasure.

During the movie the Joker repeatedly demonstrated he didn’t have a conscience. For a person to have a guilty conscience you need a standard of rules that judge your actions and the knowledge you are going to be held accountable.  The Joker had no standard and no apparent accountability. This was why the Joker smiled and laughed all the time, not only because his face was cut, but because he never felt bad about murdering people.  In order to feel guilt you need someone to hold you accountable for doing wrong.  According to the Joker no universal standard existed and therefore he had no accountability to a transcendent law giver.

An action can only be wrong if an outside transcendent standard exists.  If objective morality doesn’t exist then there are no universal laws.  If a moral relativist does what he thought was wrong all he has to do is change the rule.  If the Joker at one time thought murder was wrong, he could change his rule to murder is right and good.  Thus he is guiltless because killing people is right and good.

Does anyone want to follow a moral system where the Joker is the moral hero?  This is why most moral relativists love to live next to people who believe in objective or universal moral right and wrong.  Who would want to live next to a Joker?

Next post: Unmasking the Deception of Mormonism Part 1 Who are the Mormons?