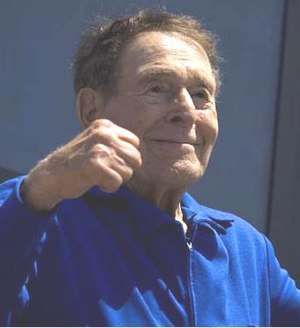 Secondly, to refute the idea evil proves God doesn’t exist is to make sure the objector has his facts right.  A true story will help my explanation.

Back in 1996 I was sitting at an awards banquet receiving, as a representative for the physical education department at Grant Middle School, The California Governor’s Council on Physical Fitness and Sports award for excellence.  At my table was my principle Julie Rich, Olympic decathlon gold medalist Bruce Jenner, gymnastics gold medalist Peter Vidmar, creator of Jazzercise Judi Missett, and television exercise guru Jack LaLanne.  It was a star studded table as we shared lunch together.

During our meal the conversation was dominated by the opinionated Jack LaLanne.  He seemed to be a self-proclaimed expert in multiple areas including who is responsible for violence in this world.  Jack very dogmatically proclaimed to the entire table, that religious belief was the greatest killer of human lives throughout history.

As I heard this proclamation, I knew in my heart I couldn’t let this go unchallenged.  I looked at Jack and said I believe you have your facts wrong about religious beliefs and violence.  I told him the greatest mass murders of all time were atheistic.  According to the 1995 Guinness book of World Records, under mass killings, the worst killers of all time were Stalin, Lenin, Khrushchev, and Mao Zedong (Mao Tse-Tung), all atheists, who had over 100 million people murdered.  I saidreligions have caused harm but they are not close to millions murdered by atheistic regimes.

The table went silent.  This was incredible, especially since Jack had not been quiet the entire lunch.  My principal looked at me as if I was from Mars.  You see I had no star power and I just challenged one the most famous television personalities of all time.  As I looked to my left I could see Vidmar and Missett smiling.  I had not only quieted Jack LaLanne for the first time during lunch but I had made a compelling factual counterclaim to his ramblings.  After 5 seconds of silence, LaLanne quickly changed the subject and began spinning another tale, with himself as the focus.

False facts lead to false conclusions.  In a conversation don’t let the atheist share false information about religious beliefs.  The mere existence of evil does not lead to the conclusion God does not exist.  If you are challenged by an atheist, first make sure they have their facts right.  Then ask them to define evil.  Whatever they say will boil down to a definition set by the group in power or by society.  For the atheist, “Might makes right.”  Explain to them without ultimate or objective goodness murder is only wrong if the group in power says it’s wrong.  When Stalin, Lenin, Khrushchev, and Mao Zedong established murdering innocent people was good for their society, then in an atheist world this is good.  If the atheist objects and calls what these rulers did was wrong, ask them where they got this standard.  A standard requires objective morality and in an atheist world objective morality does not exist (see “Do objective morals exist” part 6).

In summary two major reasons the conclusion the existence of evil disqualifies God is false.  First, just because some religions have practiced evil or some religious people have done horrible things doesn’t disqualify the existence of God.  The conclusion doesn’t follow from the premises.  Don’t let the atheist reach this false conclusion.  And second make sure the objector has his or her facts straight.  Atheism throughout history has murdered more people than any other belief system.  Finally, make the atheist define evil.  It will always come down to the society in power creating what is good and bad.  Without objective moral evil, then might makes right.

Next post: What if They Never Heard About Jesus? Part 2