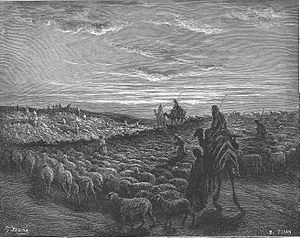 The first test looked at ancient historical sources to see if they supported the Biblical Jesus.  Historians Josephus, Tacitus, and Pliny the Younger provided ample support.  I now move to a second test for discovering the historical Jesus.

Do we see evidence confirming or contradicting the ancient biographies of Jesus?I need to begin by looking at the archeological support of the Bible, which contains the strongest ancient evidence for the life of Jesus.  The Bible must not be looked at as a single book; it is a collection of writings, many of them are historical accounts of God’s unfolding plan.  The books of the New Testament are the best multiple independent attestations of the life of Jesus.  The Gospels and Acts are a series of writings that are open to historical investigation.  Much of today's confirmation of the historical accuracy of the Bible comes from the field of archaeology.

I will begin by showing historical support for the Old Testament.  Jesus quoted the Old Testament and treated it as historically reliable.  Jesus spoke about individuals like Jonah (swallowed by a large fish), not as legendary characters but as real people.  This is why I believe it is important to first establish the historical accuracy of the Old Testament. Renowned archaeologist William Albright said,

“There can be no doubt that archaeology has confirmed the substantial historicity of the Old Testament tradition.”

It is important to understand we still have gaps in confirming the accuracy of the historical record of the Old Testament.  Critics use this as an opportunity to attack the characters of the Old Testament.  They say we don’t have evidence Abraham ever lived and lack archaeological support for the migration from Mesopotamia to “The Promised Land.”  They say the stories about Abraham, Isaac, and Jacob are legendary accounts passed down through generations.

What does the evidence tell us?  Critics beginning in the 1800s denied the existence of Abraham’s so called hometown of Ur of the Chaldees (Gen. 11:31) until excavations in the 1920s-30s uncovered an immense temple tower at Ur near the mouth of the Euphrates in Mesopotamia.  Over time archeologists have found the name Abraham in Mesopotamian records.  Other Biblical accounts of treaties Abraham made with neighboring rulers, even the price of slaves, mesh well with what is known elsewhere in the history of the ancient Near East[1].

Much of the evidence from this time period has been lost.  Yet, nothing in Genesis contradicts the nomadic way of life, with flocks and herds that was characteristic of the life in the nineteenth or eighteenth century B.C.  Simply because we cannot find the names of the early patriarchs does not mean they didn’t exist.  One fair minded historian once said, “Absence of evidence is not necessarily evidence of absence.”

Many names of ancient cities in the Bible have been discovered. In addition to Jericho, places such as Haran, Hazor, Dan, Megiddo, Shechem, Samaria, Shiloh, Gezer, Gibeah, Beth Shemesh, Beth Shean, Beersheba, Lachish, and many other urban sites have been excavated, quite apart from such larger and obvious locations as Jerusalem or Babylon. Such geographical markers are extremely significant in demonstrating that fact, not fantasy, is intended in the Old Testament historical narratives; otherwise, the specificity regarding these urban sites would have been replaced by “Once upon a time” narratives with only hazy geographical parameters, if any.

Or visit the Site Map

Previous post: Part 6 How did Pliny the Younger support the Biblical Jesus